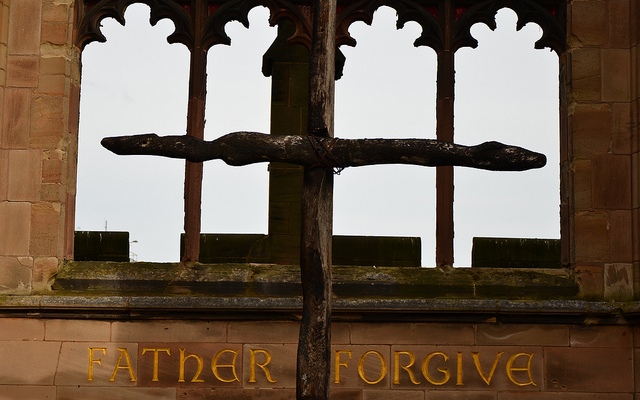 I was near Geneva on Saturday and woke to the news of the carnage in Paris the night before. We grieve with all those who lost loved ones, those who are forever changed by what they witnessed that night. So many questions, so much violence.

Just a few days before I had been reading again of the events of another night many years before, this one in Coventry in England. It was on November 14 in 1940. Nazi bombers were nightly attacking London and other cities, including the industrial town of Coventry north of the capital. In a devastating attack that lasted 11 hours, the centuries old cathedral in Coventry, St. Michael’s, was virtually destroyed. At least 600 were killed in the area with perhaps as many as another 400 dying in the ensuing fires.

The next morning as the Vicar (or Senior Provost), Dick Howard, and others walked through the ruins, there were no words. Just as there are no words for what happened Friday in Paris. Or in countless other places of violence and evil all over this planet. Somehow words of any value fail us at these times. As they should. All the Vicar could do was scratch in chalk on one of the remaining walls behind the altar the words Father Forgive.

Six weeks later in his Christmas day message carried on BBC radio, Howard said these words: “We want to tell the world..that with Christ born again in our hearts today, we are trying, hard as it may be, to banish all thoughts of revenge….We are going to try and make a kinder, simpler, a more Christ-child -like sort of world in the days beyond this strife.” In writing the words, Father Forgive, Provost Howard did not add the words “the Nazis” but left it to include all of us in our own sin and need.

The Cathedral was not re-built fully until 1962, but the old ruins still  stand next to the new building. The words Father Forgive are now permanently engraved above the altar. But these are not just words. A ministry of reconciliation is based there that has touched the world in its impact, including in Iraq.

Yes, there really are no words in times like this. Just tears. But perhaps the same heart cry as Jesus uttered from the cross, Father Forgive....can fill all of our hearts right now. Not vengeance, not endless cycles of violence, not self-justification. Only a cry for forgiveness and for mercy. Let it start with me.