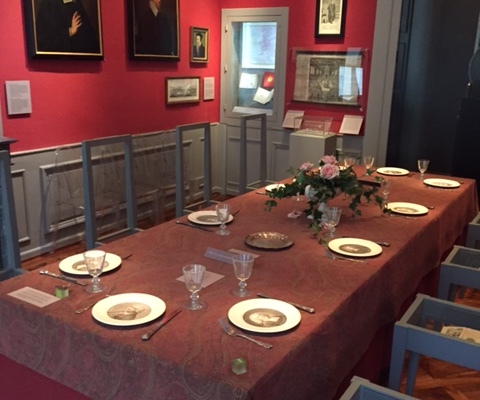 Imagine being present at a dinner party, where around the table were people who had lived at different periods over two hundred years. People who considered each other “heretics” and would have eliminated the other viewpoints if given a chance. What kind of dinner party would this be?

Last week while visiting Geneva I went to the International Reformation Museum, an extremely well-done presentation of the 16th century movement. Geneva was the center of the French Swiss version led by John Calvin. In one beautiful room of the museum is a table set for dinner, each place with a plate and name tag. (pictured in the photo above). An audio visual presentation begins, with John Calvin at the head of the table giving his views on the doctrine of predestination. Then one by one a light shines down from above on each place in turn, and a different voice begins by introducing themselves and giving their views on the topic. These leaders lived at different points over 200 years, and had widely varied ideas. The last person to speak is at the other end of the table, and is Jean-Jacques Rousseau, who to Calvin and others at dinner would have been a arch-heretic.

As I listened to the presentation I was struck by the creativity of those who designed it, as well as the variance and development of different theological positions just on that one topic. But I was also impacted by the idea of how seldom those with such widely contrasting views would have actually taken the time to eat together, not to mention listen or read what their enemies would have written. In my last post I noted how often a presumed “heretic”would at the very least have their writings destroyed so others would not be contaminated. It is interesting that in this dinner party at the Geneva museum, each seat had on it a primary source of that particular person’s  writings. To eat with those we disagree with, to listen to them, to read what they write and really attempt to understand. These unfortunately are not things we normally associate with behavior toward our enemies.

In my last post I wrote of how Nestorius, the Bishop of Constantinople, was exiled in 428 A.D. after a bruising battle with Cyril of Alexandria over the nature of Jesus Christ. There were several issues involved, but it is crucial to remember that Nestorius emerged from a line of theological thought that came from Antioch, where Cyril was from the quite different center of Alexandria. Both places emphasized different aspects of who Jesus was, with Antioch more stressing his humanity and Alexandria his divinity. When Nestorius was condemned his writings were destroyed. But during exile he wrote a book I mentioned in the last post, copies of which survived and provided an opportunity for re-assessment in the 19th century.

One of the problems throughout history in judging the work of “heretics” is that usually so little survives of what they actually wrote. This is often thought to be the case for Pelagius, the Celtic theologian of the 5th century whose primary opponent was Augustine of Hippo. As J. Philip Newell points out in his book, Listening for the Heartbeat of God, “Generations of theology students have been told about the dangerous heresy of Pelagius and the derogatory term ‘pelagianism’ has come to mean any doctrine that gives central place not to the redemptive grace of God but to our capacity to save ourselves. Seminarians have been instructed to write essays comparing Pelagius and Augustine, with no doubt as who was to be the hero and who the villain.”

But then a key point is made by Newell that concerns whether Pelagius’ writings still exist. These seminarians (and this was my own impression as well until recently) “have been told that virtually none of Pelagius’ original writings remain, so that most of the source material about him-largely negative, at times even vitriolic-is by Augustine of Hippo. In fact, it now appears that much of Pelagius’ work is available, although much of it has yet to be translated from the original Latin.” (emphasis mine). As I wrote previously, history is written by the victors, and in this case it was clearly Augustine. But why have so few of Pelagius’ writings been critically examined and discussed? Thankfully there is more and more a re-assessment of his thought going on, and a linking of him in context with the Celtic culture, Church history and mission movement. Similar in some ways to how important it is to place Nestorius in context with Antioch and those that had gone before him like Theodore of Mopsuestia.

I’m planning my own research into Pelagius’ writings, and wanting to note more parallels to the thought of the Church of the East on certain points. But the point I want to make in this post is how important it is to actually read what your “enemies” have written. To actually listen to them, to attempt to understand. To have them over for dinner if they are still alive. Yes it can be fearful to read opposing viewpoints, to listen to someone you disagree with. But how important to really try and understand before we condemn others. How often it is today that you can listen to someone who is judging someone else, only to find out they have never actually engaged directly with their viewpoint.

It may not be “safe” to do so. But it is the most loving thing to do. And if we let it, it may change us in ways more important than just changing the way we view or understand an issue. It may open our eyes to a person made in the image of God who deserves our respect, however much we disagree.

One thought on “A Dinner Party for “Heretics””