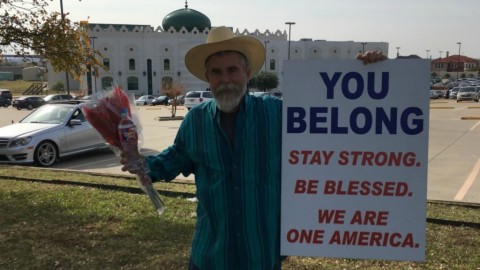 Today on the radio I heard a story that touched me deeply. Maybe some of you have heard it. It concerned a Texan man who is a sign-maker. Many times we associate people who hold up signs as those who have a message of hate, of anger. But this was different. This man had a different message. One of hope, of encouragement. We can only hope that it is a message that will go far and wide the next months and years.

His name is Justin Normand, a 53 year old man from Dallas who wears a cowboy hat. But Mr. Normand wasn’t holding up a sign in a protest march. He holds it outside a mosque in Irving, Texas. His sign is not one of hating Muslims, but loving and including them in a changing United States. As you can see in the photo, it reads: ‘You Belong. Stay Strong. Be Blessed. We are One America.’ What a counter-cultural message for portions of the USA that want Muslims to go, to disappear, to be put on some kind of registry.

Since Mr. Normand went to the mosque on Friday, then a bit also on the weekend, just wanting to express his love and support for Muslim neighbors, it has gone on Twitter and other social media sites. In response to a question by a Muslim at the mosque as to why he was doing this, Normand said: ‘We are out there to help one another. And your community needs help. I’m an American and-regardless of who’s here, Americans or immigrants-we’ve got to be here for one another. i’m just here because somebody’s got to speak up and say, ‘You’re valued. You’re okay. you’re part of what’s going on here.’

Wow. Think about the depth of those last few phrases from this Texan’s mouth. Think about saying that to Muslims you may know in the communities around you. You’re valued. You’re okay. You’re part of what’s going on here. How different that is from some of the attitudes and hate crimes that have happened to Muslims just since the election just over three weeks ago. I especially love the last line. You’re part of what’s going on here. Another way to say you’re included, and you belong here. The story of the USA will not be complete without you, we need to say to Muslims.

What a different spirit that Mr. Normand carries. I don’t know what influences formed him. He says he is a Presbyterian, but he didn’t do this to actively witness to his Christian faith. (Yet he is.) He did it because he wanted to ‘share the peace with my neighbors.. My marginalized, fearful, decent, targeted, Muslim neighbors.’

Did you get that? This man has some profound things to say. And some profound understanding of the feelings of many in the Muslim community at this period in American and global history. Marginalized, fearful, decent (I love that he threw the word decent in), targeted.

We need millions like Justin Normand right now. We need them in every community, every neighborhood. Every church. Every mosque and temple. All saying to the Other You Belong. Stay Strong. Be Blessed. You’re part of what’s going on here.

Would you pray with me today for that?

You can read the whole story in the Washington Post online edition of November 30, 2016. I’ve also posted a link on my Facebook page.