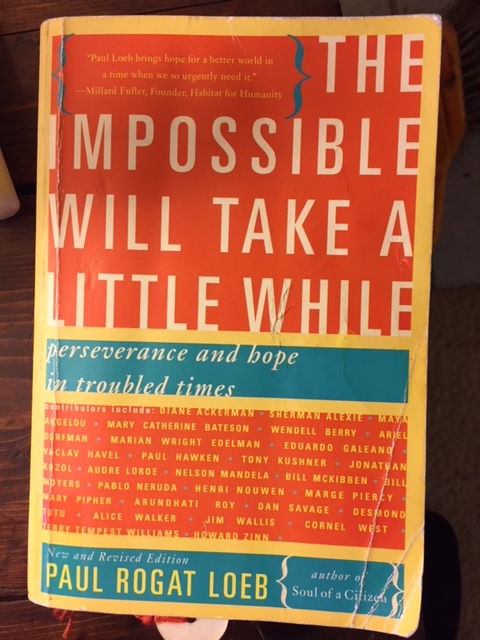 Sometimes a phrase or quote just jumps out at me. Last week hunting around our local library, it happened. I saw a book (photo included) by Paul Loeb, titled The Impossible Will Take a Little While. It comes from a song lyric by Billie Holiday, that reads The difficult I’ll do right now. The impossible will take a little while. I love the spirit behind that, the boldness and courage it personifies. It reminded me of a quote from the 19th century missionary to China, Hudson Taylor, who said there are three stages to getting any great work done: 1) impossible 2) difficult 3) done.

As Loeb notes in his introduction to this inspiring book filled with essays by people who accomplished the impossible, Billie Holiday was very familiar with facing darkness in her life. According to Loeb, “Holiday confronted plenty of darkness, from the lynchings she sang about in ‘Strange Fruit’ to her many personal demons. But her voice, still with us, rises above such circumstances, lifting our spirits.” (pg. 4) The quote about the “impossible” originally was the motto of the World War II Army Corp of Engineers and Navy Seabees. The writer of the song Holiday sang, Carl Sigman, saw these lines on a wall where he served in North Africa during the war, and it has inspired many hearers ever since.

So much in life is about having the right perspective. If we see the difficult before us as something that can be faced and taken care of right now, the impossible in our future can be transformed by hope. The impossible can also be accomplished, it just will take a little longer. In the essays in Loeb’s book, people like Nelson Mandela, Parker Palmer and others have faced great darkness internally and externally. Yet the impossible circumstances facing them became places of conviction that change could happen.

As Loeb writes, “One of the ideas that runs throughout this collection and unites an unruly array of nationalities, interests, and historical situations is that living with conviction is of value in itself, regardless of the outcome. Simply keeping the ‘affirming flame’ alive is a victory. But when doing so under conditions in which implacable night reigns, and surrounded by forces aiming to extinguish the human spirit, we can at times transform scattered, sputtering flames into beacons of promise whose light reaches across the globe.” (pg. 71)

Scattered, sputtering flames becoming beacons of promise. And then those beacons reach across the globe. Powerful imagery. But normally we all feel more like the sputtering flame, not sure if what we say and do will ever make any difference to anyone close, not to mention any farther. What if we really believed that the impossible before us could yield to persistent acts of love and kindness? What if we simply didn’t give up, and changed our perspective to one of hope and lasting faith?

How would the future look different? What beacons of promise could we become to those around us that desperately need some hope to make it through another day?

So this is my new motto, at least for this week: The difficult I’ll do right now. The impossible will take a little while.

2 thoughts on ““The Impossible Will Take a Little While.””