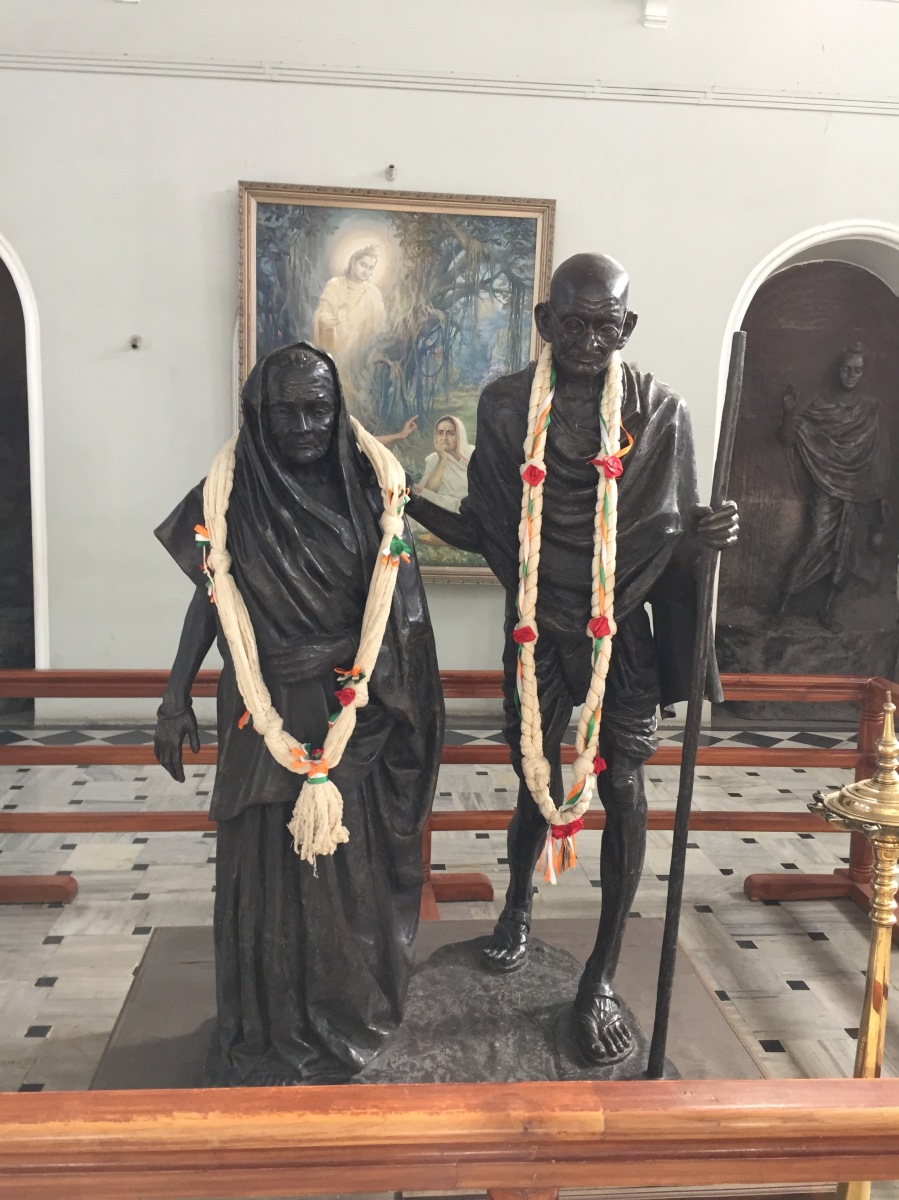 It is sometimes thought that those who change history must be outsiders. People who seem to appear as if from another time, so strange and unearthly that all around them must somehow come under the force-field of their influence.

At least, wrong to a great degree. For actually while it may be true that outsiders must have a lack of attachment to their surrounding cultures, the ones that seem to be prime movers for change actually are more likely to be ‘insider-outsiders’, or ‘outsider-insiders’.  Another way to say that is an ‘integrated non-conformist.’ Someone who has deep connections to their society, or has established a depth of relational networks if they are from outside, but also someone who for whatever reasons has gone to the fringe, to the wilderness, to the desert.

One such person I was thinking about is Mahatma Gandhi (in the photo with his wife Kasturba from a museum in Pune, India), who grew up in the state of Gujarat in India, then studied in England and lived in South Africa for several years before returning to India to lead the freedom struggle against the British. Gandhi was a mix of ‘insider-outsider’ his whole life, a complexity of contradictions who continually baffled his friends and particularly his enemies. He was consistently under-estimated, perhaps one of his greatest strategies.

Mahatma Gandhi was an ‘integrated non-conformist’, a term used by British historian Niall Ferguson in his latest book The Square and the Tower: Networks, Hierarchies and the Struggle for Global Power. Ferguson, however, does not use that description about Gandhi. That is my usage. In this book, Ferguson writes of the importance for our 21st world of networks, but also describes how networks have been in existence since the beginning of history. Combined with this role of an ‘integrated non-conformist’ is also the idea of someone who is a ‘bridge between networks’. Gandhi also fit that title. He worked for change in part by continually developing new networks between religious faiths, social classes, and even with the British. He even had close relationships with missionaries like the American Methodist E. Stanley Jones and the British Anglican C.F. Andrews.

Another person in history that fits these descriptions is someone that was deeply inspired by Gandhi, Martin Luther King. Last week was the 50th anniversary of his murder in Memphis by James Earl Ray, when King was only 39 years old. King grew up in the American Deep South, a product of his culture and time, yet always seeking for more. He was an ‘insider’ in many ways, yet as he studied for the ministry and developed his philosophy of non-violent action for social change, in part inspired by a trip to India and the example of Gandhi, he became very much also an ‘outsider’.

Martin Luther King also fits the description of an ‘integrated non-conformist’, as well as a ‘bridge between networks.’ Before his death he was able to build bridges and connections between races, political forces and religious groups that included friends as well as enemies. King had many periods in his life in the wilderness, when he doubted himself, was vulnerable emotionally and sexually, and came close on several occasions to giving up. But isn’t that the common refrain for people like this in history?

It is not easy to be on the fringe. To be constantly wondering if you will ever be accepted, even by your own people and culture, not to mention by those you have voluntarily exiled yourself among. There is a deep pain to that, to feel like you are being torn between the very networks you are seeking to bridge. It is so much easier to be a conformist. To follow someone else’s lead, to not speak up, to not have to feel the sting of the chill of being on the outside.

But who will change history? Who will make a difference in the lives of those around them? It is not the aliens from another world. It is those of us that are integrated, but also willing to walk to the edges, to the fringes, to the liminal spaces.

Welcome to the world of history-changers.