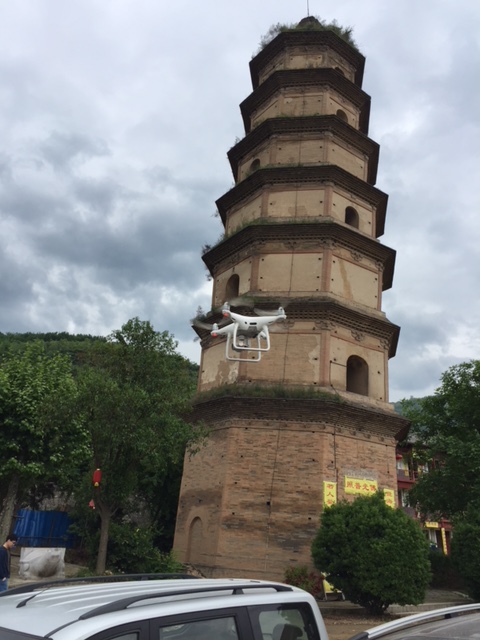 Sometimes things are too strange to even describe. But I will try. Last week, on a visit with friends to another of the ‘wonders of the Christian world in history’, in this case the 7th century Da Qin Pagoda outside Xi’an in China, we arrived to see a drone hovering around it. I have written before about this Pagoda, which according to many scholars both East and West, actually is the earliest surviving structure of the Church of the East in China, and at one time included a monastery next to it. (See Hidden in Plain Sight For Almost 1400 Years, Part 1 and also A World Beyond Trump: Hidden in Plain Sight for 1400 Years, Part 2 ).

Driving up to this amazing sight, preserved over almost 1400 years, even on my second visit gave me a keen sense of anticipation. But imagine my sense of disorientation when I saw on arrival a white drone flying just above the Pagoda! I did not realize that the drone’s owner and operator was someone that was a friend of another part of our group, already there before us. The pictures that came of the top of the structure, and up close to it, were exquisite. But somehow it left me with such a sense of dislocation, of being completely out of context.

You can see in the photo with this blog post the drone hovering in front of the Pagoda. Two things that don’t go together, one from the 7th century most likely, the other a rather recent invention from the 21st. So different, so unable to fit together. But as I thought about it further, it struck me what a metaphor it is for the lack of comprehension of the spread of the Christian faith into China and other places in Asia so early comparatively. In most of the tellings of Church history, the faith did not arrive until in the last 500 years, or perhaps with the Mongol period of the 13th century.

Not so. This Pagoda, as well as other evidences that I have written about in other posts, testify to a very different reality. And when we put these new realities into the picture, it tends to seem like a drone and a Pagoda together. They don’t seem to fit! Requiring us to change our paradigms, sometimes completely. Changing what we believe about Asia, about the spread of the faith, about not only the past but also the future. When something seems not to fit into our present context of understanding, it can be quite jarring. There is a delightful word in English for it, hardly ever used: the feeling of being discombobulated.

What on earth does this mean? Well, I’m glad you asked. The dictionary definition of discombobulated is to be ‘confused or disconcerted’, ‘upset or frustrated’. To find out what we have believed about something is wrong, or not the whole picture, can often leave us feeling out of sorts, a bit undone. It requires new categories for us, new places of understanding. Of course we can just keep going on, and pretend we didn’t see anything or learn anything new. It would be like me arriving at the Pagoda last week, seeing the drone, and pretending the drone didn’t exist.

Radical learning happens when our contexts are challenged to the core, and we choose to embrace that disconcerting discovery and press in deeper for more. But how painful it can be to be discombobulated! It even sounds painful!!! But when we yield to the process, and allow the different contexts to co-exist, some amazing learning can happen. Somehow that day at the Pagoda, as I got my brain around a 7th century structure and a 21st century invention, the past and present (and future) came together in a beautiful way for me.

When we allow those discombobulations to happen, new places of learning also happen. And new understanding enables us to see new patterns, new shapes, new connections in history.

Ready to be discombobulated??