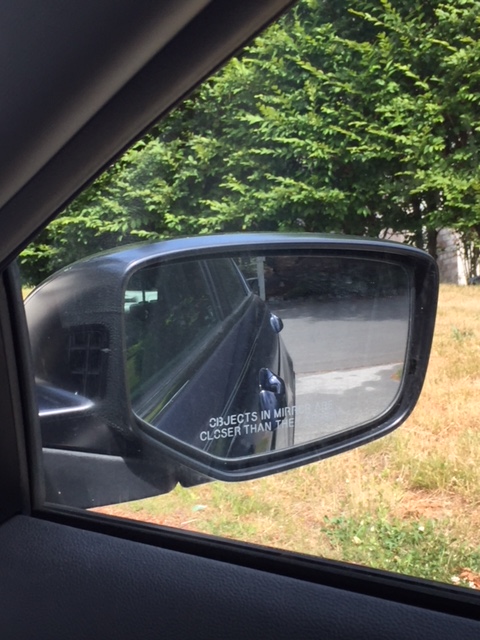 It’s written in fairly small print at the bottom of most side mirrors in cars. A curious phrase really. Objects in mirror are closer than they appear. This is meant, presumably, to have you not rely on what you see in your mirror of  the approaching car, but instead realize that it is actually much closer. But who pays much attention to this? I’m not very technically oriented, but I really don’t understand why we should have a mirror on a car that actually tells you what is false? Does anyone think that helps?

A better way to do it, in my opinion, was what was installed in the rental car I drove last week up I-5 highway from California to Washington state. When a car would pass you on either side, a sensor would cause a light to go on to let you know it was passing. If you tried to change lanes and the car was passing or in your lane, a small alarm would sound. Much better than relying on mirrors that tell you the wrong things.

But seeing that phrase on the mirror again got me thinking. It made me think of a different way to say it: Objects in the future are closer than they appear. I’m reading a book right now by New York Times columnist Thomas Friedman titled Thank you for being late: An Optimist’s Guide to Thriving in the Age of Acceleration. Somewhere in this book, and I tried to find unsuccessfully today the exact page, Friedman mentions this illustration of the car mirror and applies it to the future. Perhaps the key word for the book also comes in the second part of the title: acceleration.

Friedman, who has written several outstanding books on International Relations and the Middle East, gives the year 2007 as a key point of acceleration when Steve Jobs and Apple launched the I-phone, Google launched Android, Twitter started, Facebook had only started a few months before, Amazon released the Kindle, and on and on. The accelerations that have continued since are jumping by the year, and by the day. The premise of Friedman’s book is that in the midst of all the acceleration, humans need to learn more than ever to hit the PAUSE button or survival will not be guaranteed.

So back to the mirror on the car. When you look at or think about the future, events say 50 years from now can seem far distant. But actually with the kinds of accelerations that are happening in life and society, the objects in the far future actually are much closer than they appear. Life is not the same, and it is not going back to a slow speed for most of us. Learning to pause is no longer an option, but is now a necessity for our long-term sanity and well being. The sheer amount of information we process on a given day is overwhelming.

The habits of learning to pause, to reflect, to live well with those around us, are like those sensors on the rental car I used. They alert me to who else is around, who might share my lane of life. Habits of reflection and self-examination also alert me to potential accidents that can happen in my highways of life, keeping me centered in the path I am called to. Sensors deal with real distances, real proximities. Mirrors, especially false ones, deal with images and sometimes even fantasies.

The future is closer than we think or imagine. The present is accelerating. The habits and rhythms we have had in the past will not be enough for the future that is upon us. How are you learning to pause in your life? What are the new rhythms you are learning to cope with in an accelerated world?

One thought on “Objects in Future are Closer than They Appear”