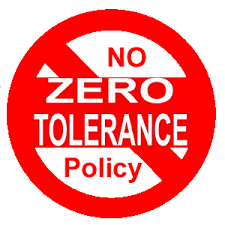 Irregardless of the politics involved in the present issues in North and Central America, there is something very wrong about the nature of a ‘zero-tolerance’ policy. In anything. I do not pretend to understand the complexities of the immigration issues on the US southern borders. I know that illegal immigration has been a problem for years, and several US administrations from both parties have tried and failed to deal with it. But the stand the present administration is taking, that of ‘zero-tolerance’, will not in the long run work either.

It is for various reasons an extremely poor choice of words, in the same category of using the slogan ‘America First’, which is loaded with historical baggage from the late 1930’s. Using that phrase of ‘zero-tolerance policy’, with images of families being separated from one another and today an audio surfacing of children crying during separation, conveys a sense of heartlessness and lack of compassion. I have heard the arguments for enforcing the policy and law at the border. There are certainly good arguments in some of the discussion, but the demand to be tough and enforce will quite likely be unsustainable and will backfire.

What does ‘zero-tolerance’ mean? According to one dictionary definition, it means a ‘refusal to accept anti-social behavior, typically by strict and uncompromising application of the law.’ Many of the arguments for a hard-line policy at the border deal with the law, the need to enforce the law, perhaps in a ‘strict and uncompromising way’. But when has a strict and uncompromising attempt to enforce rules ever really worked ultimately? Whether in parenting, relationships of any kind, dealing with national problems, international law? To divorce the law from compassion and grace leaves a parent, a national leader, a global states-person in a place that can’t be sustained, can’t be defended ultimately.

Taking a ‘zero-tolerance’ stand in any area of life sounds really good, but it leaves the one holding that view more open to self-righteousness and moral deception. Life is messy, and complex issues require complex relational based solutions, not the uncompromising application of law that leaves all parties bloodied on the outside and unchanged on the inside. The issue of immigration in the United States reminds me often of the issue of gun freedom and gun control. There does not seem to be any possibility of change in the future in these areas, partly because what is needed is compromise, giving up rights (or guns), talking to each other instead of past each other as the lobbyists rule and reign.

I say no to a ‘no-tolerance’ policy. In any area of life. Yes, tolerance can be a word filled with many meanings in our day, including that of moral compromise. But I still would rather be counted as a tolerant person than a person known for the strict application of the law, no matter what it means impact-wise for real human beings created in the image of God.

As I write these words, the US Congress is having urgent meetings to try and address this problem of children being separated from parents. The arguments from both sides continue, and perhaps a short term fix of legislation will happen soon that will at least attempt to bring some addressing of the problem. Let’s hope and pray for that.

I have heard both sides try and quote the Bible this week, defending their positions. But it does make me wonder, what does Jesus feel and think tonight about this issue specifically? I somehow find it very hard to see Jesus trying to defend a ‘zero-tolerance’ policy. He constantly reached out to the marginal, the forgotten, the children, the outcasts, the sinners. He healed the lepers, conversed with a Samaritan woman, ate dinner and stayed in the home of the hated tax collector Zaccheus, and so much more.

Oh, how I long to be more like Him in every way.