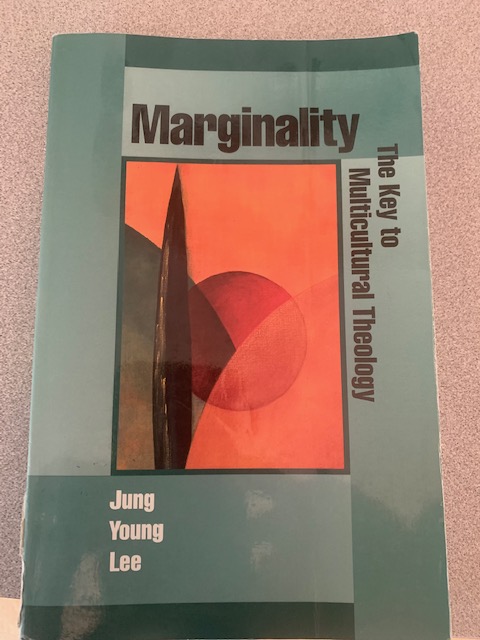 Life on the margins has its own power, but it also has its own special pain. After all, it is easier to live in the center where power is, where you feel you can have an impact on events and people that the margin doesn’t provide. But throughout history many of the key social, political or religious movements have happened from the margins. Think of the Quakers, the Methodists, the Pentecostals, movements for women’s rights or abolition of slavery, and many others. They may have had elements of “insiders” involved, but often those leading spent many years outside the centers of power or even in prison.

A few years ago I read an excellent book by a theologian named Jung Young Lee titled Marginality: The Key to Multicultural Theology. He reflects on his experiences as a Korean in the United States, living in the margins or the in-between. He is part of what he calls a “hyphenated people”, in his case an Asian-American, “belonging neither to the people of their lineage nor to the people of their residence.” (pg. 44). Asian-Americans, writes Lee, “are a people whose fate is to live “in-between.”

Of course this is true of many people on the earth today who dwell in the margins for reasons of ethnicity, economics, as dissidents to established power, or other reasons. A Hispanic-American said it this way, “I am caught between two worlds, neither of which is fully mine, both of which are partially mine. I do not belong in the Cuba of today: I do not belong in the States.” (pg. 45) For as Lee rightly writes, “To be in-between two worlds means to be fully in neither.”

I can relate in many ways to this feeling, as I’ve spent over half my life outside my birth nation. So often I’ve felt neither fully part of the USA, nor part of India as my adopted land. But as I’ve written elsewhere, to be “in-between” is also to be “in-both”. As Lee beautifully says,”In-both complements and balances in-between.”

I’m sure many of us at times feel on the margins. We feel excluded, left out of important decisions or events. Fear of Missing Out (FOMO) has actually been classified as a real syndrome by the medical world. Perhaps there should also be a Fear of Being Excluded or being forced to the margins. Yet when we realize that being “in-both” is a great positive and not only the seeming negative of always feeling “in-between”, awareness of great richness can be released in our lives.

Jung Young Lee writes that there are five feelings inherent to marginalization. First is rejection, one of the greatest pains any of us can feel. Lee relates the story of how in his denomination in the US he was passed over for a position in his church, and actually told it was because he was “different”. He then told the group that they might as well tell him directly that he wasn’t getting the job because he was “yellow” in complexion and not white. This kind of racism is of course extremely blatant, but there are more subtle rejections happening all the time. Not getting invited to meetings, left out of decisions. Excluded due to gender, race, class or social level.

The second one is humiliation. To be humiliated is to be de-humanized. One practice that I try and do in my life, though not consistent, is to see every human being I encounter as indeed that: a human being. Created in the image of God, infinitely valuable, yet of course also marred with the imperfection of sin. I would love to go through a day where I consciously see every person I meet that way, a precious human worthy of my respect and love. And to vow never to humiliate or de-humanize anyone, in any way. Living on the margins can be humiliating, especially if we believe we actually deserve the center. It is so easy to live as the victim, instead of finding the “in-both” richness of the margins.

Thirdly according to Lee is the feeling of alienation. On the margins we can feel a distance and alienation from others that can be very crippling. But if we see it as an in-bothness, the distance can disappear.

Fourthly is loneliness, so common to people on the margins. I have felt this loneliness, where you don’t feel part of any conversation going on in the room. But I also have rarely felt, like so many others have, that feeling of loneliness that comes from not even being “seen” because of my color, race, gender or class. Along with that comes the last one, nothingness, the most extreme and deadly feeling of being on the margins. This is where by not being included and not being seen you begin to feel literally like you are nothing. Your existence doesn’t even matter anymore to anyone. This is a deadly stage, where nothingness leads to despair and desperation.

Live deeply into your margin, whatever it may be. Don’t try and escape it, don’t seek to be at the center of power. If that is your God-ordained destiny, it will come. Embrace the pain of the margins, and with the in-betweenness live into the in-bothness. For yourself, and for others.