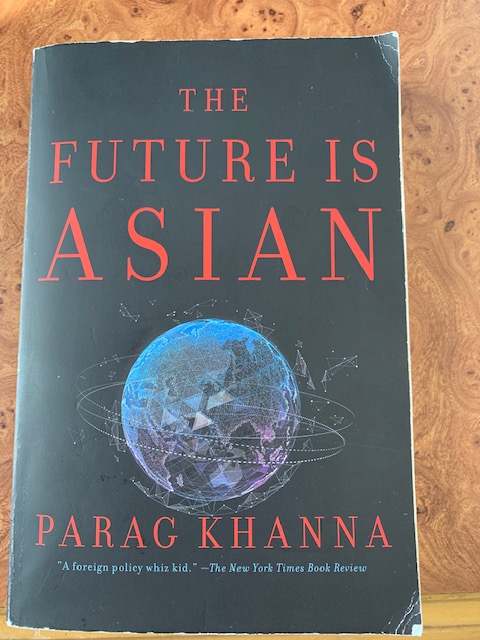 The title of this post, of course, is a bit misleading. There is really nothing anyone can do to ‘make Asia great again’, or indeed to stop it becoming great. Over five billion people, the majority of the earth’s population, live from the shores of the Mediterranean in West Asia all the way to Japan’s Pacific Ocean coast. For much of world history, save the last 500 years, Asia has indeed been the place of most of the greatest civilizations known to mankind. Perhaps by 2100 we will look at the Western period of dominance from 1498-2020 as a blip in time. That is certainly my opinion.

For the writer of this must-read book, The Future is Asian, (if it sounds familiar to readers of this blog, it is because I have mentioned it before), the ‘cornerstone of an Asian-led world order’ began in 2017. That is when 68 countries, with two-thirds of the world’s population and half of the world’s economic power met in Beijing for the planning of the Belt and Road Initiative. This is an extremely ambitious re-imagining of the ancient silk roads across Asia and into Europe. Led by China, it has already resulted in solid development in tangible areas for many of these nations.

If you are a Westerner who believes that the United States is going to be made great again, Parag Khanna will be difficult for you to read. He grew up in India and the U.A.E., was educated in New York and London, and now lives in Singapore, what he calls the ‘capital of Asia’. I have seen him interviewed and read one of his other books, the brilliant Connectography. No matter where you are from, you won’t agree with all he is forecasting about the future. But he is still crucial to read and engage with.

Khanna writes that ‘Asia is the most powerful force reshaping world order today. It is establishing an Asia-centric commercial and diplomatic system across the Indian Ocean to Africa, reorienting the economies and strategies of the United States and Europe, and elevating the appeal of Asian political and social norms in societies worldwide.’ (pg. 15) Asia does not need to be made great again. We are returning to a world order that was very familiar up to the latter part of the fifteenth century.

For the past 500 years of the colonial and post-colonial world, much of the earth has been dominated by the West whether by force or by cultural influence. But times are changing and have already changed in many ways. As Khanna writes ‘Westerners must be placed, even briefly, in the uncomfortable position of imagining what it’s like when about 5 billion Asians don’t care what they think and they have to prove their relevance to Asians rather than the reverse.’ (pg. 16)

Wow. There is much to reflect on in those words, and in this book overall. The West is not going away, nor should it. But we have entered a period of a truly multi-polar world order. The recent disarray in both the US and United Kingdom and the very real questions of where both are going are concerning for several reasons. I have written before of the dynamism of Asia, and of course also its own conflicts and tension points that threaten war and turmoil.

A future of five billion people is a future important to the whole earth. Wherever you are from, I highly encourage you to read people like Parag Khanna and engage with his ideas. The future is already upon us. How do these ideas shape our leadership decisions, investments, commitments, and allocation of workers for companies and missions?

Make Asia Great Again. Yes, just a slogan like others we can think of in our world today. But this one is really happening right before our eyes, and indeed has already happened. And no one on earth can stop it happening in an even greater way in the years ahead.