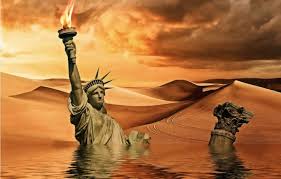 The future is a scary place. Especially when hope is scarce and fear is allowed to run rampant. I hear and read of so much fear right now. It comes from across the political spectrum, both from the right and from the left. And sadly the Church is caught up in it all, not often able to rise above the culture wars and bring a message and Gospel of hope and redemptive love. To be bogged down in the quicksand of cultural despair based on political imaginings is to fall far short of who we are meant to be in Christ and our calling as reconcilers.

When I was in Washington DC last week I read a thought-provoking editorial in the Washington Post by Michael Gerson, former speech writer for President George W. Bush. Gerson is an evangelical Christian and a graduate of Wheaton, a liberal arts college known for its excellence in Christian scholarship. He calls his piece ‘This Contest of competing nightmares is no contest’ and starts with “America is in a contest of contending nightmares. For those on the right, their dreams are ‘currently troubled by ‘wokeness’ and critical race theory.” For those on the left, ” the nightmares of progressives are currently dominated by the growth of right-wing authoritarianism and racism”.

Gerson says about both right and left, “like most nightmares, there is a grain of truth within such terrors.” In his editorial, Gerson chooses the version of the future he believes is most deadly to the nation, and it is the one on the right that ” has taken over a major political party, which is in the process of purging all dissent.” This written by a life-long Republican and evangelical Christian. The ideology that could “undo the America system” is “right-wing authoritarianism”, according to Gerson. He ends with the chilling statement, “in a contest of nightmares, it is not even a contest.”

Though I agree with Gerson in his assessment and conclusion, that is not the main point of my post. It is how the Church, whether identifying with the right or the left, has so bought into the future nightmare scenarios. Instead of living and offering a hope that is unearthly and eternal yet deeply impacting to our present realities, we wrestle in the mud with the ways and weapons of the world. Instead of living out a Gospel of kindness and love to all those we meet, we hurl words of hate and censure through social media. Instead of being the ones who should be offering a generous love, we become the biggest ‘cancelers’.

How many times have you turned on the TV news programs in the US, especially in the evening, and heard messages about hope for the future? Unlikely. Usually whether on the right with Fox, or on the left with MSNBC and CNN, you hear nightmare scenarios of what will happen from the implications arising from the day’s events. Apocalyptic language abounds, even more prevalent on the internet or lesser known TV channels. Hope for the future is very seldom to be seen, not to mention kindness for one’s political foes.

We have become a Church filled with fear and the certainty of pride in our own version of the future. We have forgotten that the kingdom of God is at work usually silently and surely even in the viewpoints of our worst enemies. Whenever we feel we are ‘favored’ by God as a nation or individuals, we may need to check again. As Father Thomas Keating writes so powerfully in his little book The Kingdom of God is like….”According to the parables, the kingdom of God is free to appear anywhere, any time, and under any guise. It does not fit into our presuppositions or expectations, and still less, our demands. In fact, it deliberately removes, prop by prop, everything holding up our ideas of the nature of the kingdom and where it is to be found.” (pg. 43)

In all our battles over ‘wokeness’, critical race theory, Marxism and socialism, Fascism, nightmares from the right or the left, we have forgotten that we are the Church, called to offer hope and life above the mud-wrestling around us. We are called to stand against the fear that is so palpable even in the very air we are breathing.

This coming week here in the United States Independence Day will be celebrated. It will be held in an amazing freedom from the virus with crowds gathering all over the nation. Though there needs to be much vigilance related to further outbreaks (and much more vaccination), there is in some ways an attitude of moving on, of hope. But on other sides, there are also dark versions of the future circulating.

If you are a follower of Jesus, don’t get swept up in those nightmares, either from the right or from the left sides of the political spectrum. Don’t worry about who is ‘woke’, instead be fully awake and attentive yourself to the hope and life of God and to a love for others. To the wind of the Spirit blowing where you least expect it. It may even be that a new revival and awakening may erupt from where you least expect it, the camp of your ‘enemy’. God favors sometimes who we least expect, and often doesn’t tell who that is. If we think it is us, it probably isn’t.

There is so much to be grateful for. And to have hope about. Offer that hope with kindness and without fear to a world that desperately needs it.