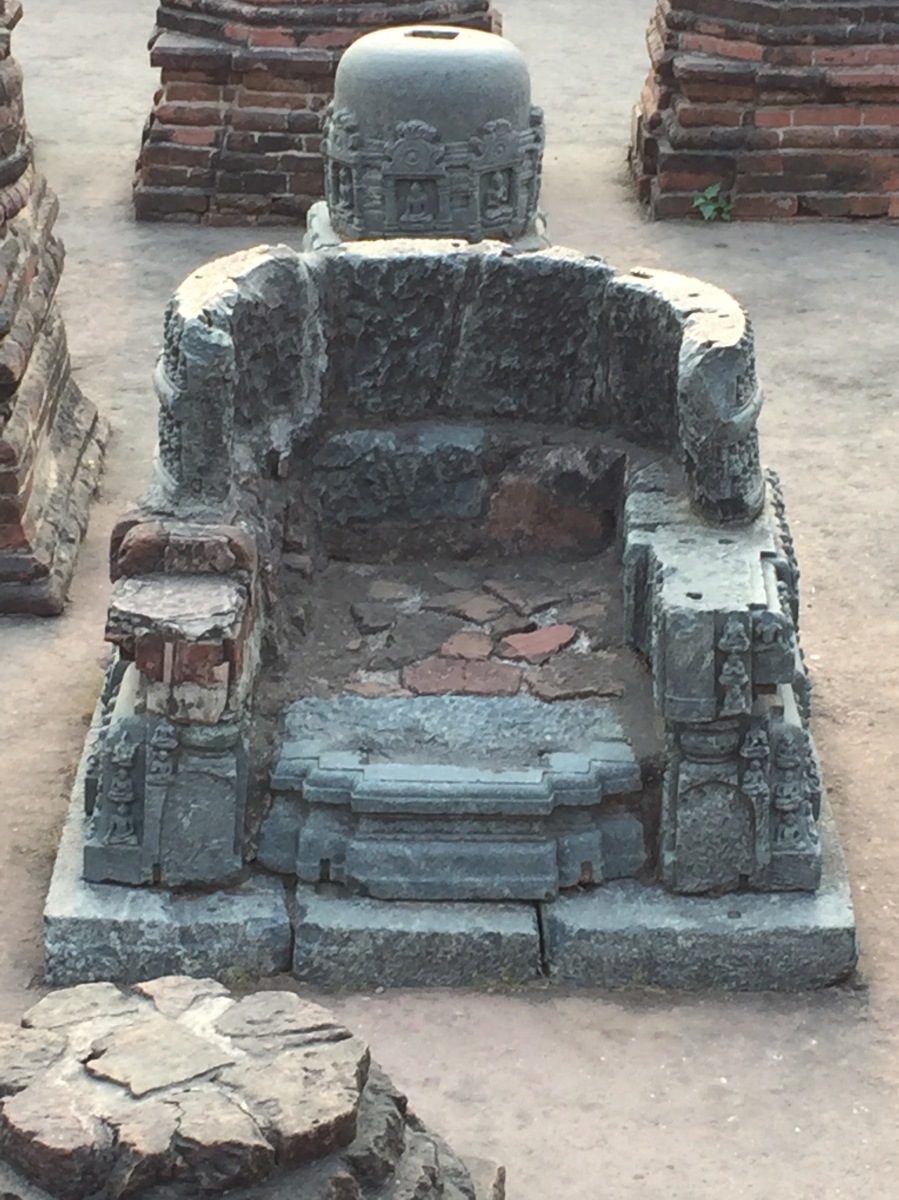 Last week I had one of the thrills of my life. Getting to visit the ruins of one of the greatest universities in history, the University of Nalanda. Located about three hours SE of the modern North Indian city of Patna (previously called Pataliaputra, the capital of several Indian Empires), Nalanda’s history as a University spanned almost seven hundred years, from the 7th to 12th centuries A.D. But here is what made it such a thrill: I expected ruins meaning bricks and parts of walls spread out over barren fields. That is what is left of ancient Pataliaputra, in the heart of modern Patna. It was very disappointing, and the excavations carried out in the 1950’s have not been visibly updated since.

The University of Nalanda, a primarily Buddhist institution at one time boasting of 10,000 resident students from over 25 countries, and over 2,000 faculty and staff, has been brilliantly excavated to reveal many of its original 108 structures. There is even a lecturer’s chair in pristine condition (my photo included in this post). I have briefly blogged about Nalanda before, The First Universities were in Asia, not Europe , but to be able to visit it and see its condition was truly spectacular. It was not difficult to imagine the many students that would have been hurrying to classes, while walking the grounds of Nalanda. In fact many of the student rooms have been excavated as well, with at least one niche in each room for the scrolls the student would have used. (in those centuries books took the form of scrolls.)

One of the sad facts of Nalanda today is that the University library structure no longer exists. In 1179 A.D., when the armies of the Delhi Sultanate under Bhaktiyar sacked and drove out the remaining monks and faculty of the University, the reportedly nine story library was burned to the ground. There are stories that it took three days to burn, with remnants of the hundreds of scrolls filling the air. Some documents have been recovered from Nalanda University and are in the nearby museum, but the vast majority were lost.

In a future post I will include more of the photos taken on my visit. But one of the impressions I was also left with was how few people were visiting this amazing site. Though a World Heritage site, I suspect that it is not on the beaten path of tourism, whether for Indians or foreigners. Just two hours away is Bodhgaya, where the Buddha is said to have had his enlightenment under the peepal tree. This whole area of India was the strongest center for Buddhism before its decline and disappearance after the 12th century. Bodhgaya is filled with tourists for much of the year, but not Nalanda. Granted I visited in the hottest time of the year temperature wise, but I understand that it is not highly visited even in more moderate seasons.

In my next post I will ask the question, were there any Christian students in the University of Nalanda in the 7th century? The possible answer may surprise you!